> Blog > 4 Kids’ Books that Inspire Civic Engagement and Voting
Authored by Marissa Wasseluk on November 6, 2018
Posted In: Our Bookshelf

It’s up to us all to show kids that in a democracy, citizens can use their voices to make a difference in our communities. Here are a few stories to share with kids to inspire them to get involved with their communities and (when they’re old enough) to vote!

Grace for President by Kelly S. DiPucchio
When Grace’s teacher reveals that the United States has never had a female president, Grace decides to be the first. Recommended for ages 4-9. 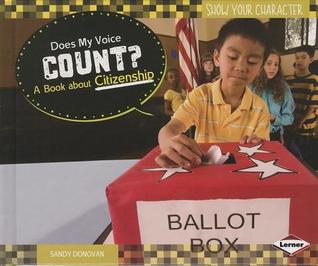 Does My Voice Count?: A Book About Citizenship by Sandy Donovan
How can you make your voice heard when you’re not old enough to vote? How can you set a good example when someone is picking on you? What can you do to make a difference in your community and in the world? Recommended for ages 7-9.

President of the Whole Fifth Grade by Sherri Winston
Start counting your votes . . . and your friends.
When Brianna Justice’s hero, the famous celebrity chef Miss Delicious, speaks at her school and traces her own success back to being president of her fifth grade class, Brianna determines she must do the same. She just knows that becoming president of her class is the first step toward her own cupcake-baking empire! Recommended for ages 7-12.

You Want Women to Vote, Lizzie Stanton? by Jean Fritz
Who says women shouldn’t speak in public? And why can’t they vote? These are questions Elizabeth Cady Stanton grew up asking herself. Recommended for ages 7-12.